We are very happy to publish a new episode so soon, but we also have to apologize for the brevity of this episode – Moscow Olympics is a subject that just didn’t fit in anywhere else, so, better to publish this alone. Here are the pictures, mentioned within the show:

Firstly, the Moscow Olympic emblem and the glorious bear, Misha!

Then comes a typical poster for the Olympics 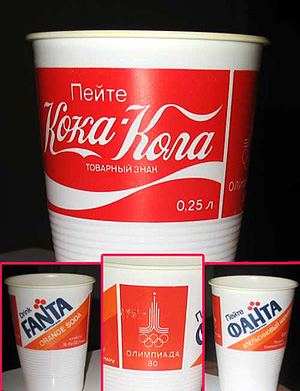 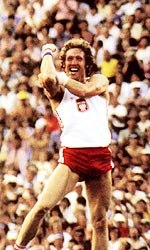 There are also some things I’d like to say:

Firstly, huge thanks to Darryl Cooper, he’s a friend of ours, and we highly recommend you, giving his “Fear and Loathing in New Jerusalem” podcast a listen, if you haven’t done so already – it’s a dark and moving story about the history of the Jew and Arab conflict in Palestine, and it’s very good.

Secondly, between the recording and publishing of this show, I managed to get into hospital. find the issue that iTunes might have with us, get out of the hospital and decide what to do with my Soviet memorabilia. That means that we still might somehow get into iTunes, which is awesome. Also, that means that as the next episode is a Christmas (in the USSR) and Q&A special, there will be prizes! I have a lot of pins, badges and all kinds of small Soviet memorabilia at my or my relative’s places, and some of that stuff is quite awesome – including some real Soviet medals for actual achievements, like “Hero of Labor” and “Work Veteran” and the like. So, we’ll be giving you stuff. Cool, old Soviet stuff. The ways to get stuff are:

1. If you have any questions you would like us to answer, so post them in the comments, send them to our e-mail, or to our facebook page (https://www.facebook.com/TheEasternBorder/ – as I know that some of you can’t find us by searching) , and we shall answer them in our next show and the author of the best question (or authors of questions, not limited to just one), shall be contacted and some interesting soviet pin or badge or a small flag will be sent to them. The time limit is the 19th of December, and the winners shall be announced on the next podcast episode, which will come out in the week after that.

2. And this is a bit bigger one: We shall also choose one person among those who donate to our show during December, and send them an actual Soviet Medal. An authentic medal, given to people for real achievements. (Achievements may be possibly pointless.) You can feel like Brezhnev, while wearing this to work, basking in the adoration of your capitalist colleagues. Yes, this is a bit of a fundraising scheme, but the size of the donation has zero impact on who gets to be the new owner of a Soviet medal, and we feel that this is the fairest means of doing one. We can’t really afford to send more than one, though, because a lot of you don’t live in Europe, which means that the shipping costs limit us. Also, the time limit for this one, is all of December, and we shall announce the winner of a genuine Soviet Medal in the first episode we make in January. Important note: this will be a civilian medal, not a military one. We at The Eastern Border believe that military medals should only be worn by those who earned them, and that giving away such medals randomly is morally wrong.

The photos of the actual stuff that you’ll be getting will be posted on our webpage and our Facebook page at about 15th of December.

And, as always – enjoy the show!

5 Comments on Episode 6 – The Olympic Burger